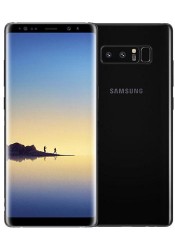 SellCompare compares prices from ALL the leading device recyclers in the UK, so you'll get the highest price for your Samsung Galaxy Note 8 256GB - guaranteed. We do all the hard work by collating 1000s of recycling and resell prices every few hours, so you don't have to check each website individually.

﻿The Galaxy Note 8 is the best phone Samsung has ever made. The price might be a little steep for some buyers, but if you don't mind making an investment, the Note 8 will be an awesome phone for years to comeNote8 specs-Display: 6.3" Quad HD+ 2960 x 1440 Super AMOLED, 532ppi -Dimensions: 162.5 x 74.8 x 8.6 mm -Weight: 195g -Color: Midnight black, orchid gray in the U.S.; deepsea blue, maple gold internationally -Operating system: Samsung Experience based on Android 7.1.1 Nougat -CPU: Qualcomm Snapdragon 835 (octo-core, 10nm, up to 2.45GHz) -GPU: Adreno 540 -Rear camera: Dual 12MP telephone and wide angle, -Front camera: 8MP, f/1.7 -RAM: 6GB/8GB LPDDR4 -Storage: 64/128/256GB UFS 2.1 2-LANE -Ports: USB C, nano-SIM slot/microsSD, 3.5mm audio jack -Battery: 3,300 mAhDesign and displayThe Note 8 features an attractive, striking look that makes most other phones on the market look old.It also makes rival handsets look small. The Note 8 has a monstrous 6.3-inch, Quad HD+ Super AMOLED screen.With its extremely thin bezels, the Note 8 is actually very compact considering its screen size, but still measures in at a finger-stretching 162.5 x 74.8 x 8.6mm. Its screen is curved, which gives it added visual appeal, and it’s available in a range of attractive colour schemes: black, blue, grey and gold. Unfortunately, the blue and grey versions aren’t available to UK consumers.FeaturesThe Note 8 comes with a lot of attractive additional features, including a microSD card slot, which you can use to boost the 64GB of onboard storage, a rear-mounted fingerprint scanner, iris- and face-scanning tech and even a headphone jack.It’s also IP68-rated, which means it’s resistant to dust and water.Under the hood is an octa-core processor paired with 6GB of RAM, which makes it a very powerful handset indeed, ideal for multi-tasking and heavy use.Software It runs Android 7.7.1 Nougat – it's almost certain to receive the Android 8.0 Oreo update in the near future – but it isn’t a pure version of the operating system. Samsung has added a number of extra features, some of which are designed to help you take full advantage of that massive screen.App Pair, for instance, lets you group two apps together and open them both at the same time with a single tap of your finger. They appear in a split-screen view, allowing you to do things like watch a YouTube video and look at directions on Maps at the same time, for example. Google Assistant is on board too, living alongside Bixby, Samsung's own virtual assistant that's only just launched properly in the UK.S-Pen The Note brand’s trademark feature is the S-Pen, a stylus that’s designed to help you get work done. If you’ve got small hands, it can also make the enormous Note 8 easier to handle.Samsung says the new S-Pen – which is also water- and dust-resistant – is more pressure-sensitive and has a finer tip than older versions. You can use it to write and draw on the Note 8’s screen, and you can slot it into a special hole in the phone’s bottom edge when you don’t need it.One of its most useful features is the ability to write notes without turning on the Note 8’s screen first, and pin them to the lock screen. It’s ideal for writing and maintaining shopping lists, for instance. It also lets you hover over text to translate it.Camera A major talking point for the Note 8 is its dual camera setup. It combines a 12-megapixel telephoto lens with an f2.4 aperture with a 12-megapixel wide-angle sensor with an f1.7 aperture.Samsung has included optical image stabilisation and a feature called Live Focus, which lets you tinker with depth of field and adjust bokeh both within the camera app and after you’ve taken a photo. On the front of the phone, meanwhile, is an 8-megapixel selfie camera with an f1.7 aperture.