Your old mobile is full of precious metals

A diamond-encrusted iPhone can set you back anything from £10,000 to £10 million. If that kind of bling is a little out of your price range, dom’t worry. Every smartphone contains precious metals including gold, silver, copper, platinum and palladium. These precious metals are now looking more precious than ever, as increased smartphone demand means that we face the prospect of one day no longer being able to afford to dig them out of the ground. Suddenly your smartphone is looking a lot more valuable than you might think.

The hidden value of the metals inside our old electronics, and how we might best extract those materials is one of the hottest topics in WEEE (electronic recycling) today.

What Metals are in my Smartphone? 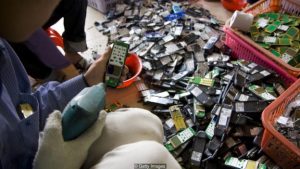 Mobile phones contain  many valuable metals and uncommon earths. An average iPhone contains around 0.034g of gold, 0.34g of silver and 0.015g of palladium. This is in addition to 1000th of a gram of platinum. It additionally contains 25g of aluminum, and 15g of copper. It’s not just mobile phones that contain these valuable elements. Everything from telephones to PCs contain them. Guiyu in China forms is a key location that highlights the squander of these precious metals. In 2008, up to 80% of material handled there originated from abroad .

And this is only the tip of the iceberg. Smartphones also contain a whole host of uncommon earth components. Some of these components are plentifully available, however they are difficult to mine. These include yttrium, lanthanum, terbium, neodymium, gadolinium and praseodymium. In addition to these metals, there’s also plastic and glass. Then there’s the battery. So all in all there are quite a significant number of components that we need to recycle.

More than 2 billion people on the planet now own a mobile phone. This makes for a lot of waste when they are no longer required. This number is likely to rise over the next 10 years, as more and more entry-level phones are manufactured.

Why is this such a Problem?

The fact is that 2 billion people in the world own a mobile phone. This means that potentially 2 billion people will upgrade to a new one in the next 5 years. And what happends to people’s old phones when they upgrade? Some are recycled, but a large number are put in a drawer and forgotten, or simply sent to landfill. We only correctly recycle 10% of mobile phones at the end of their useful life.

Therefore if you have a load of mobile phones from yesteryear gathering dust in your home somewhere, you could be sitting on a potential goldmine. Experts predict that we could soon be in the same predicament with precious metals used in smartphones as we currently are for oil. However the difference is that these precious metals can be recycled and reused – but only if we dispose of them properly.

Just in case you’re considering collecting people’s old mobile phones and starting your own electronic goldmine, we can confirm that it will be a waste of time.  The miniscule sums of precious metals in each phone mean that the value is incredibly low. It’s only on an enormous scale that any significant amount of money could be made from the metals inside the phones. The prospect seems a lot more tempting on a large scale. For example, a million mobile phones would contain 16 tonnes of copper, 350kg of silver, 34kg of gold and 15kg of palladium.